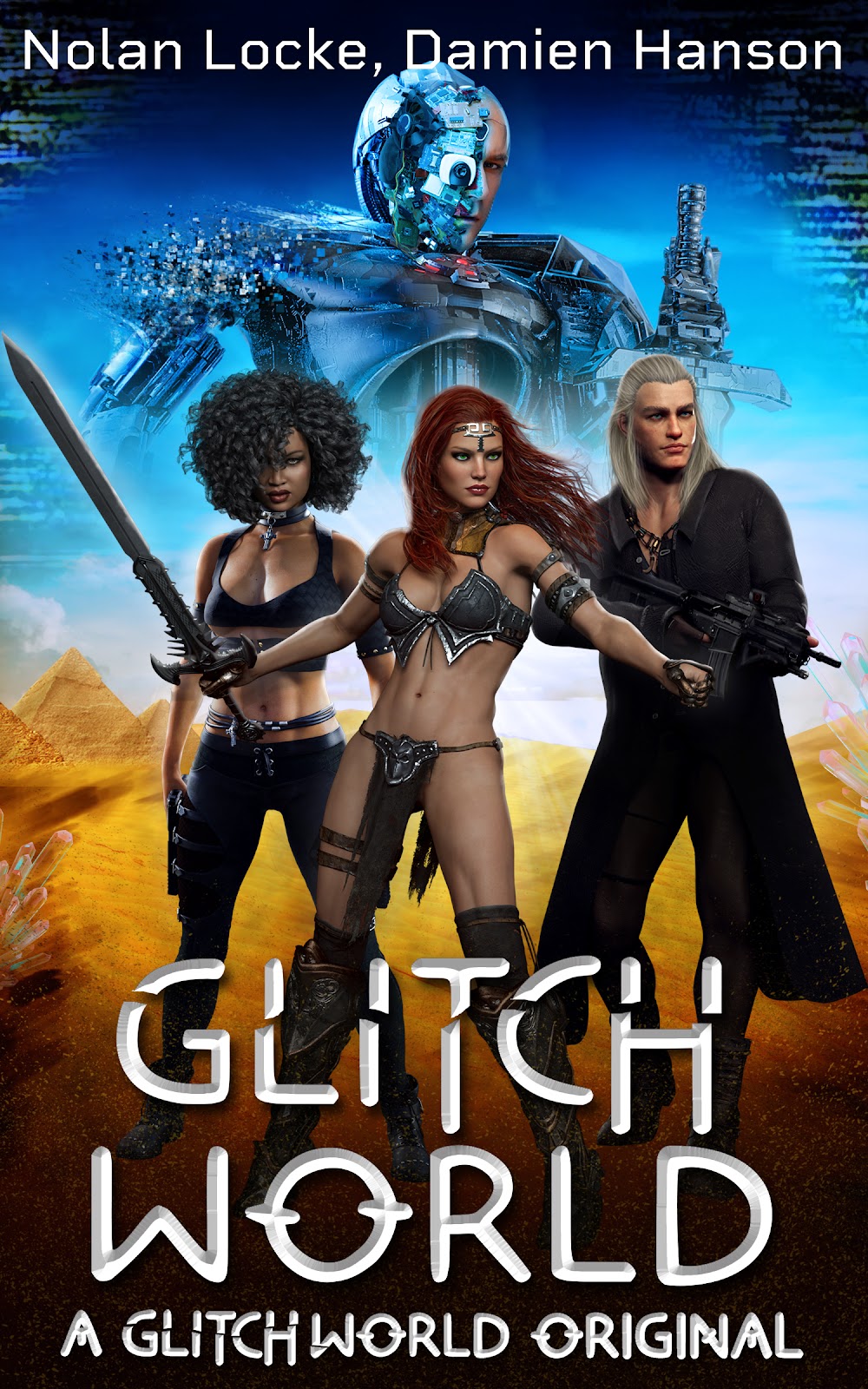 Gruesome Gary, villain extraordinaire, stumbled back under the blast, his metallic visage strained. He laughed a villainous chortle, his dark cloak billowing about him as his dark rumble shook the ground beneath them. Streaks showed over his body where bits of the villain had melted to slag. Meredith Johnston was impressed. He’d already lasted longer than any of the others before him.

She rolled as he returned fire, doing a tight somersault to lodge herself behind the jagged remains of a ruined home. Her dark skin gleamed under the full moon’s light as she checked through her inventory, readying a level 2 gauss super rifle for her next attack.

“What do you think you are doing back there, hero?” the villain called. His metallic robotic voice was filled with scorn. “You shall never defeat me, Masked Marauder! I destroyed every single one of your puny League of Loser friends and now I shall destroy you too. It is simply a matter of time.”

“Or, if you want to live, I offer you mercy. Come out and bow before your new king.”

Meredith clacked her rifle, activating her super speed as she sprinted out from cover.

Pow – pow – pow! Gary’s plasma blasts thrummed out from his cannons. He led his target with his fire, trying to guess her moves. She ducked, rolled and dove as blasts pounded into the dirt about her. But the last whinged her and sent her flying into a tall elm tree.

Goddamn, is he good! she thought with pride. Rolling a selector in her mind’s eye she stopped at her suit’s shield generator, and let it spring. It bounced out around her in all directions with a bizarre boing! Gruesome Gary chuckled darkly, focused two lasers dead center and let loose. The smell of ozone filled the air, with a sound like fzzzzz.

I’ve only got a few more seconds before he cuts me to shreds, Meredith realized. Thumbing the selector from one to ten, she breathed out, relaxed, aimed the trunk-sized gauss rifle, and squeezed the trigger. Kadoosh! Burnt air and lead expelled out behind her as the elephantine blast struck Gruesome Gary right where she had aimed: in the two ball bearings that simulated his testicles.

“Ahhhhhhhhhhhhhhhhhhhhh! You dirty whore!” Gary yelled. The robotic parts of his metallic body glowed orange and began to melt. Some of him dribbled down his body. It cooled quickly in the night air, but the agony was plain on his partly human face.

He fired a few more blasts, then looked up at the moon. A pained grin came to his ruined and streaked face.

It was a trick.

“No! No nono nononono!” Meredith yelled. Her shield failed about her, even as she tried to sprint away from the ambush she’d spotted too late. A blast pounded her in the shoulder and she spun as she fell, still yelling.

“Oh yes, Masked Marauder,” Gruesome Gary boomed. “I don’t need to kill you in personal combat. I can accomplish the same by annihilating the whole damn city. Muahahahaha. You lose, Marauder. You lose and I win.”

He rose up into the sky on rocket powered boots. He blazed up into the night sky. All around them flickered the lights of Cityopolis. Lights that would soon be quenched forever if Meredith didn’t do anything about it.

She bounded to her feet, knocking her bruised and burned shoulder back into place with a hard punch of her fist. “Not yet you don’t, you metal bastard,” she called, using her suit’s interface to call up an electric grappling hook made of pure energy. It blazed and sparked to life, then shot from her hand like a python striking its prey.

“Muahahaha!” he cackled. The voice was artificially amplified so it echoed through the entirety of the city as thought he was speaking through a bullhorn.

Meredith Johnson stared down at her gloved hands. The suit was cracked and charred, dark blistered skin showing underneath. Think Meredith think! There’s gotta be some way to take this bastard down.

She peered up into the sky and watched. A fiery blaze sparked in the midnight sky and then a stream of red-yellow plasma lanced down toward her. She shook off the fatigue, the weakness and the wounds, and dove at the last second to ride the concussive wave of the blast to the rooftop of the next building.

“Bring it!” she yelled, a bit of blood trickling out through her teeth. She rolled her hands through the air in a circular pattern, leaving glowing blue lines in her passage. Then she shoved both hands forward. “Skaddoken!” she bellowed. A tremendous blue-white glob of flame flew up at her cackling target.

“Gaah!” Gruesome Gary moaned. She could see him sparkle as he fell from the sky.

“Electro-Magnetic Pulse for the win! Didn’t your mama tell you the bad guys never get away with it?” the Masked Marauder said, swaggering to where the half-robot tyrant had finally fallen. “You are going to spend the rest of your days behind bars.”

“But I’m not,” Gruesome Gary said from behind her. She barely had time to turn before she was blasted into the wall of the next building over. It had all been a Gruesome Gary copy! A facsimile! She would give him props if he weren’t about to kill her. “Let me add that watching you fight my simulacrum was tremendously entertaining. Instructive as well. But now, Masked Marauder, you die!” And with those concluding words her hand reached out and an orb of energy the brightness of the sun blasted forth to finish the hero.

Damn, this boss might be the best one I’ve ever programmed, Meredith thought. She rolled forward, stats and mathematical equations rolling through her visor as she tested and probed the latest boss addition to the system.

“Pause,” she called out. Everything froze. Behind her, a glitchy Gary jumped in digital stillness jerkily.

“Someone get me a DICK, full charge. I want to run this boss battle just one more time before I take my two weeks.”

A little ways away, the moonlit rooftop scene vanished into a large white office with a ridiculously high ceiling, populated largely with computer desks littered with half-eaten snacks, soft drink cups, and empty fast food containers. Several other women stood about, contemplating the scene or the massive panel of statistics cascading downward in code form beside the superhero sim.

“Amber, didn’t you run these noobs through the acronyms yet? Jesus Christ– dude, I’m telling you to get me a Disintegration Induction Chain Katana ASAP–”

“One DICK, full charge. Haha, you really do need those two weeks. And some hard boning,” her friend Amber called out. She was a technician here at Prestige Gaming and she worked with Meredith on all of her designs and upgrades. They made for a hell of a team.

“That too,” Meredith laughed. “So are we going to spin this back up or what?” she asked the rest of the gawping workers. “I mean, I’ve got a friend to pick up if you know what I mean.”

“A boyfriend?” Amber asked. “I’m shocked! Does this mean you leave the house now? That you might occasionally be open to a night on the town? Meredith Johnston, Age of the Powered Mega Boss slash Party Animal?”

Meredith couldn’t help but blush and giggle. Amber was the only friend she really had and she had a way of making Meredith say everything that was on her mind.

“I always wanted to date him.”

“There it is,” Amber exclaimed, doing a little dance. “Well, good luck getting your guy . . .” Amber spun around. “Alright people. Back to work! We’ve got at least another 23 cycles in us and I don’t want to be here all night doing them. Finish by ten and the first round is on me? Capiche? I thought so.”

Meredith went to get back into position and Amber grabbed her shoulder.

“Hey Meredith, you should come hang out with us tonight. Get out of this work work work shell you carry around yourself.”

Meredith sighed and thought to a cute boy with long blond hair and baby blue eyes.

“Give me two weeks, my trophy man on my arm, and I’ll be there every time.”

I am the founder of Damien Hanson Books. Come check out awesome authors right here at my website! View more posts